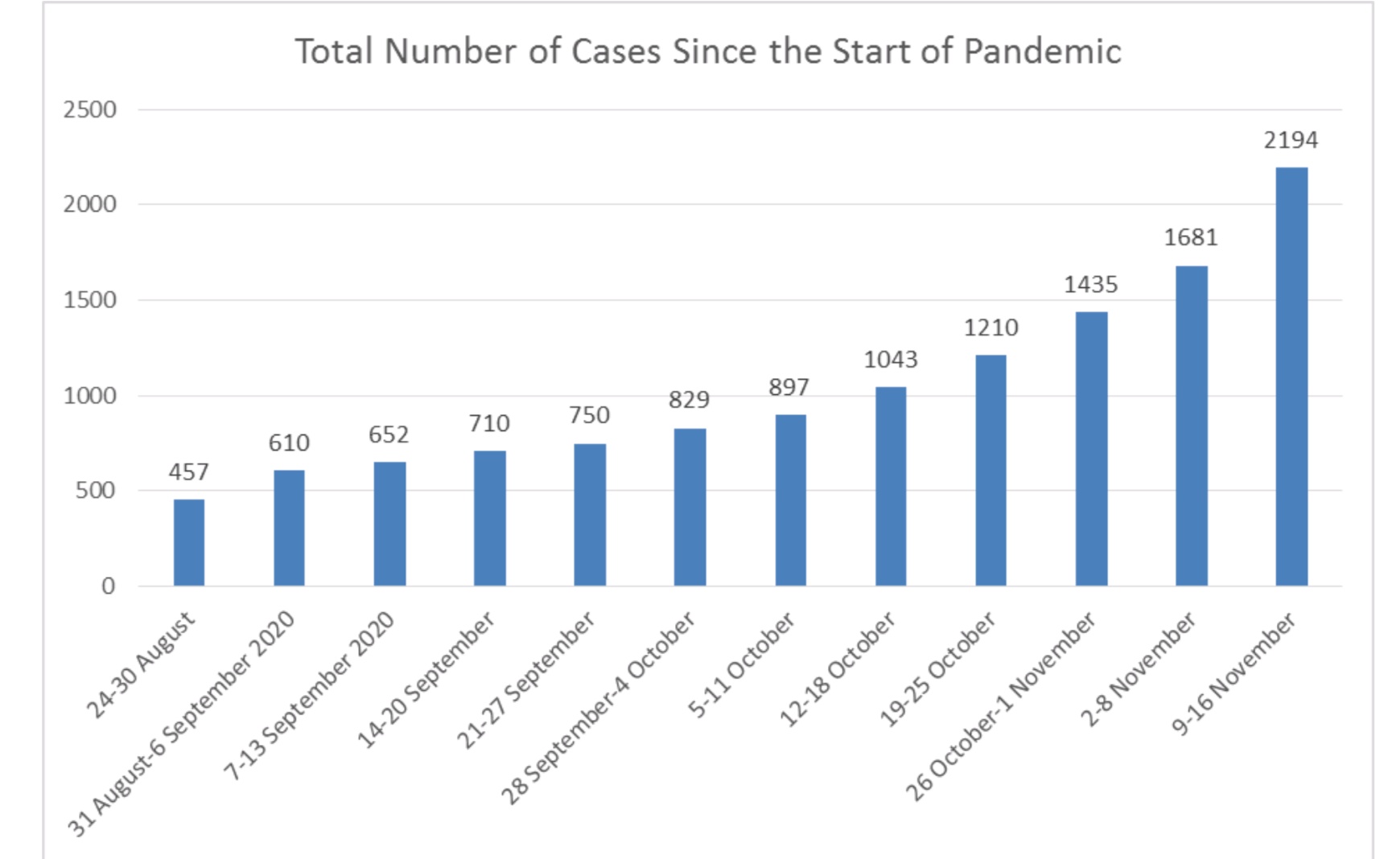 Birleşik Metal İş has shared the reality of Covid-19 in the workplaces where our Union is organized in the press conference which we organized jointly with the İstanbul Chamber of Medicine.

The epidemic reached serious proportions in the metal industry. There are active cases in three quarters of the workplaces where our union is organized.

The rate of workers diagnosed with Covid-19 has reached 30% in some workplaces.

The number of active cases in the manufacturing industry is at least 112 thousand.

3 million 280 thousand workers in the manufacturing industry work under the risk of an imminent epidemic caused by the working environment.

If the rate of epidemic in our unions organized workplaces would represent the entire population; the number of cases would be 2 million 162 thousand.

The Covid-19 epidemic which started at China in 2019 and was declared a pandemic by the World Health Organization in March 2020, continues with all its severity. In Turkey, the first official case was announced on March 11. With the partial measures taken since that day, the epidemic, whose spread was relatively reduced until the normalization process on June 1, started to rise again after June 1.

Measures taken, including "stay at home" calls made since the beginning of the epidemic, have been implemented on an inconsistent, unequal and unfair ground. And just after short time period, the unequal burden of the epidemic on the class and gender became more visible. The working class had to go on ing with "special permissions" during "lock-down" periods. The measures taken at the workplaces were insufficient to prevent the epidemic. Burden on women increased with sick-care, childcare and hygiene requirements. Unemployment has increased, unemployment of women and youth has increased even more. Increasing male violence against women was another unacceptable consequence of the epidemic.

In this process, the economic measures taken has became a "shield" for capitalists. The Unemployment Fund, the accumulation of workers own money, has turned into a resource for bosses. Workers who went on unpaid leave during the epidemic had to support their families with 39 TL (4,30 Euros) per day. Millions of people working in informal daily jobs were also deprived of this 39 TL too. Short term work, unpaid leave support, unemployment made workers even poorer during this epidemic. The conditions created by pandemic and poverty prevented workers to access to their most basic nutritional needs and to health services.

Especially after 1 June, the prevention of the epidemic was left to the personal initiative of the citizens and collective protection measures were discarded. Factories almost never stopped, the measures taken in public transportation and services have disappeared. Traveling, mass openings, meetings continued. The government turned the epidemic into a political tool. He made it a tool for silencing the opposition as he continued his own actions and activities. Government action and activities have been one of the factors that accelerated the spread of the epidemic.

The path followed by the government in the epidemic clearly reveals the tendency of the capitalists.

The government's pandemic policy and statements clearly reveal the intentions of capital and the government: Continuation of work at all costs. For this reason, working environments, factories have turned into environments where the epidemic spreads rapidly and affects the society and endangers public health.

The government's epidemic management, contact tracing policy could not be implemented in many sectors due to the bosses' concern that production would stop and the workers' concern that wages would be cut. At the request of the capital and the government, "the wheels of the economy kept on turning", the workers were left unprotected against the epidemic.

The result is that according to the data of the OHS Council, at least 368 Covid-19-related work-place murders occurred in eight months (11 March-10 November), most of which we could learn from these workers colleagues, local media and health organizations.

Our union has taken an active position against the spread of pandemic since the day the epidemic occurred. From the very first day, it has implemented many studies, taken protective steps including stopping production in workplaces, to prevent its spread.

Birleşik Metal İş Union Working Class Research Center (BİSAM) has been collecting data on COVİD 19 situation from workplaces regularly for 10 weeks through online surveys and sharing them weekly. Again, our union kept a record of the data received from our local branches between March and June. In the light of these latest data, our Workers Health and Occupational Safety department and our experts tried to determine the course of the epidemic by evaluating the data and the reality of COVID 19 in the workplaces in which we are organized was revealed with these studies. The main emergency measures to be taken to prevent the epidemic were determined.

Our union has taken an active position since the day the epidemic broke out. We made necessary interventions in workplaces, conducted workplace inspections, carried out informative activities, prepared instructions and brochures and delivered them to its members.

Today, we see that we are rapidly passing the data before June 1 regarding the spread of the epidemic. Unfortunately, we lost one of our members Hatice Dursun due to Covid-19, who works at a newly organized workplace in Gebze.

Graphic -2 Number of Active Cases According to Local Branches

Accordingly, the active case rate is 2.6 percent among workers working in workplaces where the union is organized. The number of paid employees in the Manufacturing Industry is 4 million 374 thousand according to the August 2020 data of TURKSTAT Labor Force Statistics. The workplaces where the research was conducted are medium and large-scale companies where workplace measures are taken relatively more effectively. It can be assumed that this ratio is higher in sectors that do not have unions, are smaller in scale and are relatively insecure. Under this assumption, when the said rate is applied to the manufacturing sector, the number of active cases in the sector is at least 112 thousand.

Under the assumption that the ratio among our union membership reflects the ratio in population; the number of cases would be 2 million 162 thousand in entire country. 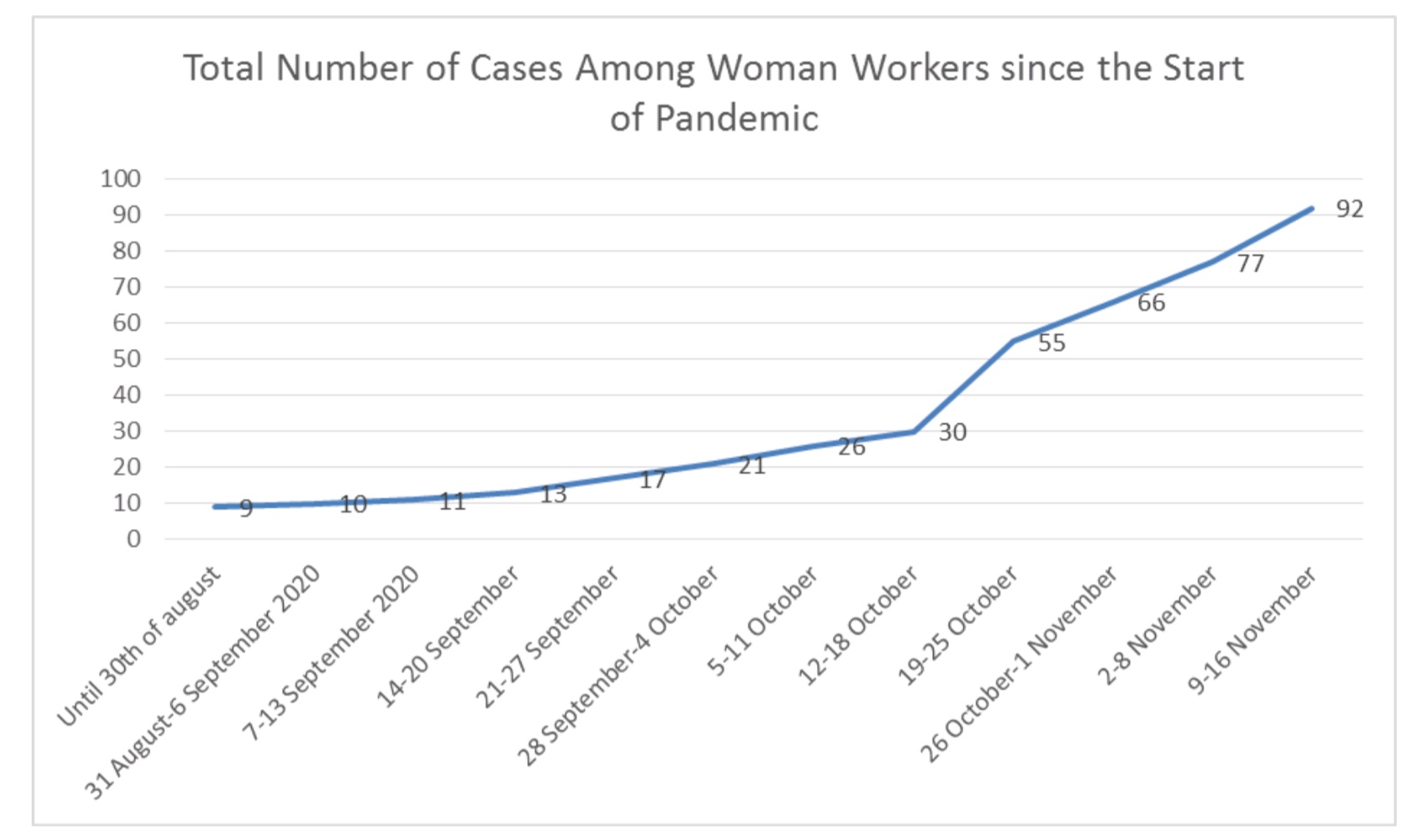 The number of cases is also increasing rapidly among women workers in workplaces where the union is organized. While the number of cases seen until August 30 was only 9, it has increased by 9 times and reached 92 since this date. 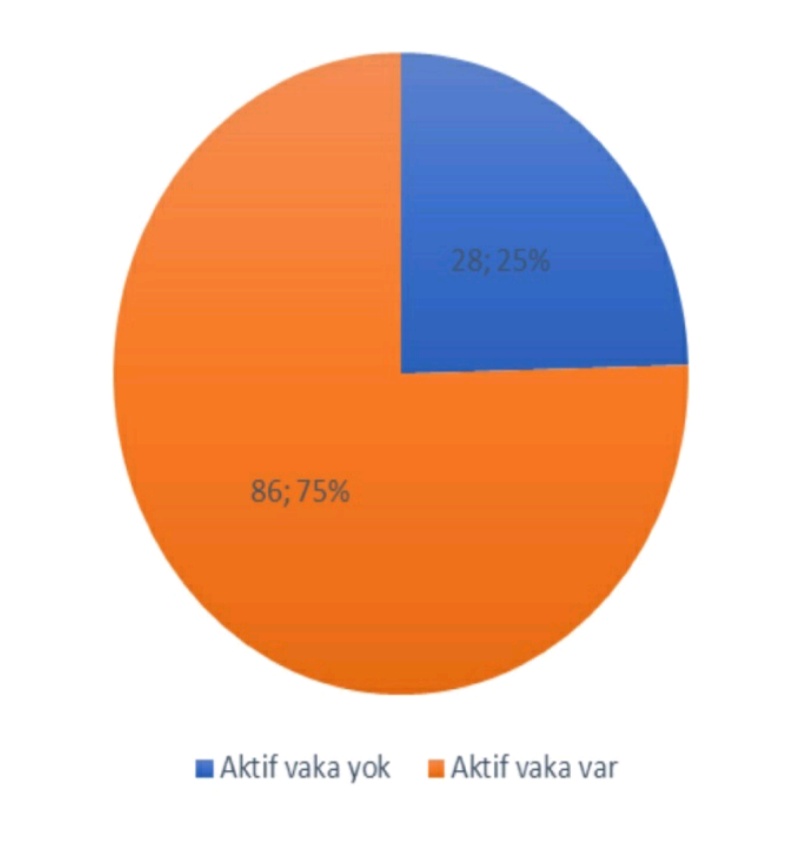 There is at least 1 active case diagnosed in three quarters of the workplaces where our union is organized. This data shows concretely that the epidemic is spreading rapidly to all workplaces.

Workplaces are alarming. In the projection we direct from the factories to the society, it is possible to easily see the inconsistency of the government in the Covid-19 epidemic management and its non-transparent attitude that disregards the health of the people.

MEASURES PROPOSED BY OUR UNION:

Government should leave aside looking at epidemic control through the glasses of capital, they have to implement an approach based on human health and right to life under the guidance of reason and science :

All workers should be tested free of charge and these tests should be repeated at regular intervals.

The time periods spent during the medical examination, test results and quarantine periods for the detection of the epidemic should not be deducted from wages of workers.

Chronic patients, disabled workers, pregnant and breastfeeding women workers should be given paid leave until the epidemic risk is eliminated.

The unpaid leave regulation should be removed immediately. There should be a real ban on dismissal.

Unemployment Fund should not be used as a source of incentives for capital but should be used for workers economically affected by the epidemic.

It should be ensured that workers reach their workplaces and return to their homes with the services provided by the employers instead of public transportation, and the number of workers who benefit from a worker service bus should be reduced by half.

Necessary precautions should be taken in food halls and social areas, and these areas should be arranged in accordance with the physical distance rules, without leaving this precautions to the initiative of the workers.

In the announcement of a possible lockdown, working life should be stopped without exception, except for services that meet mandatory and vital needs.

In jobs that can work from home, workers should work from home, but their working hours should not exceed 45 hours a week at home, increasing expenses due to working from home, such as electricity, internet, etc. must be borne by employers.

There should not be any deduction from the wages of woman workers who want to take leave because they have children in need of care at home. Government support should be provided to these workers.

For the workers who have to take care of Covid-19 patients at home, there should not be any cuts from their wages.